I've been thinking of making a shredder and extruder to recycle plastics for use in my 3D printer.

I've found some pretty cool projects out there and it doesn't look too hard to put together, a bit of CAD work and laser cutting for the shredder and maybe a bit of turning to make an extruder but even that's probably not necessary.

Marcus Thymarks Filamaker is probably the best example - https://www.facebook.com/FilaMaker and there's a few on the RepRap site. Marcus's shredder is basically a scaled down version of an industrial shredder coupled with an extruder which allows you to make filament from granules and shred failed prints to be reused. 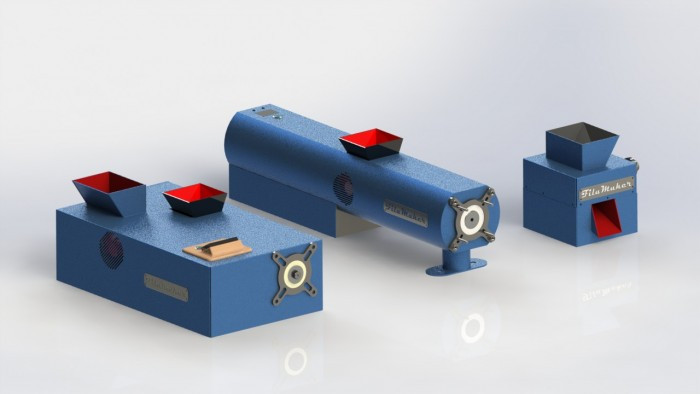 I'm pretty sure that the extruders all use some form of auger bit to push the plastic through a hot-end - basically a modified wood auger running in a steel pipe with a heating element and nozzle at one end. This is not too dissimilar to an industrial plastic extruder like you would find on an injection moulding machine. Pretty agricultural really.

Best part is that you can make your own filament from pellets which are about a fifth of the cost of buying filament on the roll or you can use chopped up recycled plastic which is potentially free. If you are using pellets you can mix colours to make multi-coloured filament which gives some pretty cool effects.

Here's another related project the Strooder. The Strooder is a desktop filament making machine that makes filament from raw pellets. I'm not sure if it can handle irregular shaped pellets (recycled material) but it's a nice concept.

There are also a few people experimenting with pellet style extruders mounted directly to their printers, a concept I really like but probably doesn't work too well on a delta style printer. There's some good information on the RepRap site relating to granule extruders worth checking out, as well as a bunch of links worth checking out in the RepRap Wiki but by far the most progress seems to have currently been undertaken by RichRap with his working Pellet extruder. Regular readers may recall that I built RichRaps 3DR delta printer, and having first hand experience with RichRaps designs I can only assume that his extruder will work just as well.

I've been saving my failed prints for a while (I've got a few :D ) and also taking note of the recycle markings on various plastic packaging which tells you what kind of material it is, there's a whole bunch of opportunity out there. It just needs a reliable way to turn this waste into 3D prints.