I have long held the view that the internet needs to be ridded of Internet explorer 6. IE 6 still equates to a massive 10% of all user-agents - some 180,233,045 users worldwide. This figure has fortunately been getting smaller, and the latest statistics show that IE6 has been in steady decline this year.

IE6 is the veritable thorn in the side of most web developers (with IE7 little better). With a userbase numerous enough to still require having to account for when developing websites, IE6 requires extraneous coding hacks to get it to function along side more modern browsers. But this may soon be a thing of the past. It seems that Microsoft themselves are now promoting the demise of IE6. This is great news, and one could only like to think that it is as the result of folk such as you and I actively promoting it's drawbacks. I personally think that IE6 has finally bitten Microsoft on the proverbial backside, with Internet Explorer usage failing to the ever more popular Firefox, which now reports some 45% market share.

The pain in the proverbials, has seemingly spurned Microsoft into action to try and win back some users, and tip the scales back in their favor - and they seem to be targeting IE6 users. So what have they done? 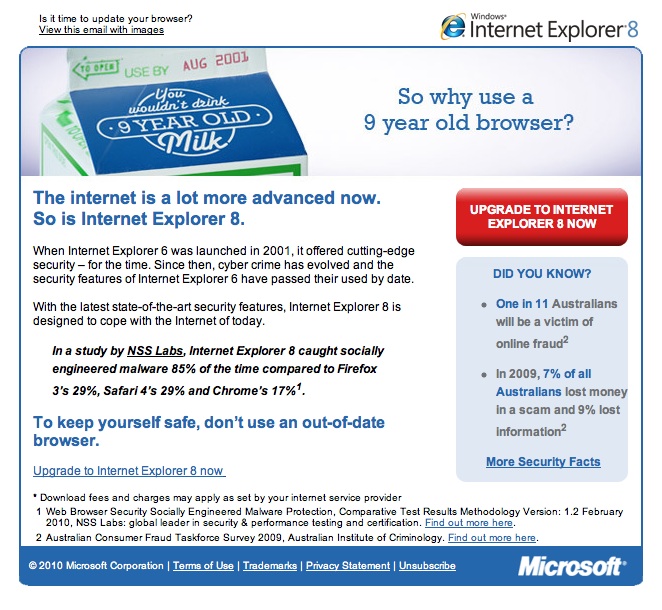 I received an email today from Microsoft  - entitled 'You wouldn't drink 9 year old milk - So why use a 9 year old browser' - a direct hit against their own Explorer 6 product. The email has a nice picture of a milk carton with the sell by date of August 2001, an amusing image directly echoing the thoughts of many of the anit-IE6 lobby. The email then goes on to explain the virtues of IE8 whilst also offering some smeary facts against the competitors to further bolster what a great product they consider IE8 to be. Typical marketing strategy here in Australia, where advertising laws do not seem to prohibit libelous comments.

it's an interesting marketing concept, and reminds me a lot of those washing powder commercials back in the UK - 'new and improved Baz washing powder - now 100% better then old Baz'. I could never see how such a ploy would work - the new version of the product, claims to be better then the old version and can get whites - white - something that the old version could not do. It just seems like a lot of lying to me, surely the general public could not be that stupid?

But, sales figures do not lie, and apparently general consumers are actually this stupid. So I think that this is probably a ploy that may work for Microsoft - after all, these stick-in-the-mud IE6 users have withstood changing to other browser manufacturers, maybe hearing that the manufacturer that they know and trust recommends that they update may sway them.

Will this gain Microsoft the upper hand? I doubt it. Even if they convert all IE6 users to IE8 users they will still be woefully short of a majority market share, not by much, but by enough.

It seems that Open Source solutions are finally coming into their own - first stop browsers - next stop operating systems... Well, we can live in hope.