I've had a marine aquarium for the past 12 years. Over this time I have battled with water quality parameters and algae issues. Most of these issues have been related to poor or inadequate husbandry as to be frank, whilst I love my aquarium, it can be a massive time hog and I'm always very time poor. So just recently I've been having another crack at getting my water parameters in check and trying to keep them there

My tank is a 5 footer with a heap of live rock, DSB in the sump, an el-cheapo skimmer and a power head. I've been dosing Randys 2 part for the past few years and it's probably about 6 years since I last did a water change. My tank params have always been on the high side for nitrates and phosphates, which has meant that I have had limited success with corals and lots of nuisance algae. But whilst I eventually gave up on keeping corals, the fish were very happy and the entire system sort of ended up in a kind of equilibrium. It's a perfect example of what a tank ends up like if you do nothing apart from replenish the basics. I ended up living with the algae, it's a bit reminiscent of my old planted tropical tank and most visitors are completely unaware that the aglae was not planted intentionally.

So about 6 months back I decided that I was going to have another go at getting things back in check and keeping some corals. I decided to go with vinegar dosing to bring down the nitrates. I followed the typical recommendations of increasing until nitrates had reduced and then halving the rate to a maintenance dose. This has now kept my nitrates steady at 0.1ppm. Great news. The next challenge was reducing the phosphates.

I decided that for me I don't really want to undertake anything that requires the need for purchasing proprietary chemicals. I'm happy with Randys Two part mix (plus magnesium) as I can mix it up myself and it's dirt cheap. Plus as I mix 3 litres at a time it's months between needing to swap the bottles on my dosing pumps. So any phosphate solution would need to follow similar principles.

Many people had good success with algae scrubbers or algae reactors. This kind of solution made sense to me as I figured that if algae is growing in the tank, why not grow it somewhere that I can control it. So looking at the available space I had left in the sump I decided that a DIY algae reactor was probably the go, plus if it failed to give good results I could result to running GFO. I did have some thoughts about how running vinegar dosing at the same time would affect the performance, but decided to go ahead, figuring that I could always cut back on the vinegar dosing if needs be. I also considered that whilst the algae and vinegar methods are competing for the same nutrients, they do so in a different manner and so could probably work side by side very well with a little tuning.

I looked around for a suitable reactor and decided on a Marine Sources 2.2L reactor. I also ordered some strip LEDs - 5 metres of water-proof 3:1 Red:Blue, as from what I could research these were the best combination to promote growth.  I fixed one end of the LED strip to the reactor using a cable-tie and then wrapped about half of the strip around the reactor securing the other end with another cable-tie. I plumbed the unit in with an old powerhead I had. 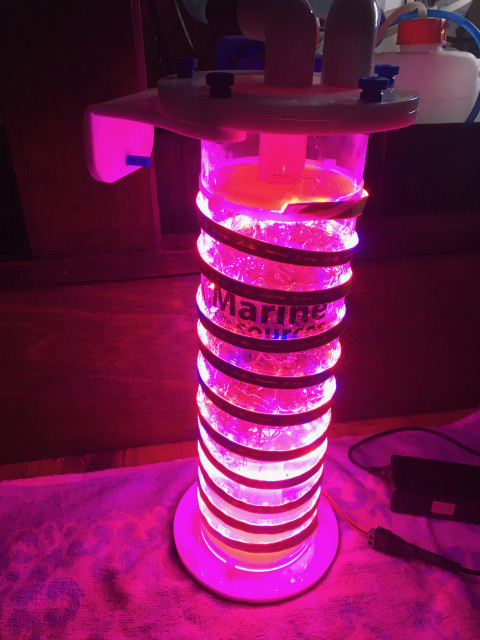 The unit is good in that I can hang it off of the side of my sump so it does not take up any space inside the sump itself which is at a bit of a premium. Here's a shot of it installed. I've wrapped some alufoil around it to try and keep stray light out of the sump as much as possible.

There's quite a few reports of DIY reactors failing due to cracking, which is often cited as being a product of the heat generated by the LEDs, however, I'm not convinced that this is the actual failure mode in this case. In short the material is a thermoplastic that requires a few hundred degrees before it changes it's molecular structure so some heat from LEDs, whilst being actively cooled on the inside from flowing water is unlikely to do anything. I think that it is much more likely that the failures (cracked plastic) have been due to UV degradation of the plastic. 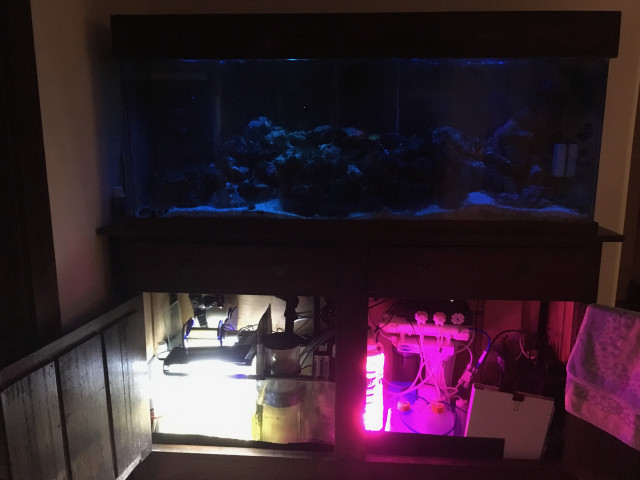 So far it's only been a few days, but there's already some growth in the cheato. and my phosphates are down at 0.1ppm 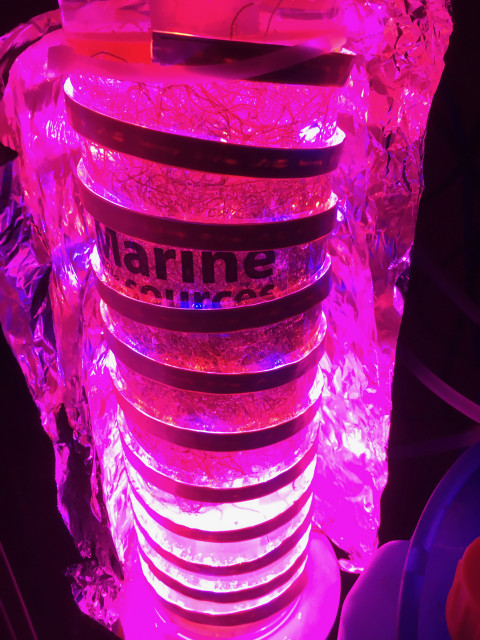 The tank is currently in one of it's algae die-off stages. The growth and re-growth of the algae is a cyclical occurrence, which if left naturally seems to have a grow-die-grow-die lifecycle. I'm hoping that now when the cycle is in the die off stage the chaeto reactor will take up those nutrients before any new algae grows back. Of course this all depends on how much uptake the reactor can take. It might take a few cycles to get it all. Of course I'm manually removing it too as much as I can, which has resulted in some interesting 3D printed implements. :D